Originally named autism (styled as au†ism), the band was formed in 1996 in Kobe, playing at local gigs. In 1998, autism was signed to Key Party Records, relocated to Tokyo, and renamed Aliene Ma'riage (styled as Aliene Maφriage).

Known for their dark, gritty sound; Kyouka's piercing screams; and melodramatic lyrics usually centred around religion, suffering, and the like, with some sadomasochistic undertones, Aliene Ma'riage became one of the most successful Key Party bands - their debut album, Les Soirée, sold out and a re-recorded edition was released. In 2000, their fanclub LA Matinée was created. One of their most distinguishing traits was the backstory created for the members, with each member playing a different character during performances. Ray played the role of an evil king, Mast playing his sister, the queen, and Kyouka played their child.

While the group achieved success, the band would be short lived, with Key Party Records becoming incorporated into Enamell Records, which soon became defunct. In 2001, Aliene Ma'riage announced their disbandment, shortly after releasing their last full album, 21st Century. After disbandment, each member would continue on with music, with Kyouka forming the short-lived session band Cupid, and later Chaos System, among others. Mast formed MIL, with Ray as support bass, before rejoining Kyouka in Native Devil. Ray would become part of the band Vinett in 2002, before playing support bass in MIL. Later on, in 2004, Ray formed Nega, disbanding in 2013. 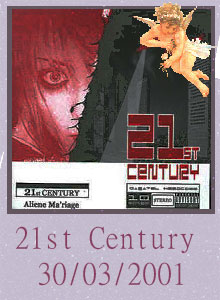 I do not speak Japanese, so any opinions I have on songs will be based on other's translations and/or the music itself, disregarding the lyrics. My favourite of their albums, 21st Century fantastically shows the feeling of a new millenium. As a whole, the album strikes a nice balance between a more futuristic sound and the traditional one heard in previous albums, complete with some fun synth, frantic guitars, and Kyouka's characteristic screams. The opening track, Kouhai (World Wide Waste), begins with some classical string music, before transitioning into the main riff with some background flutes. It's a slow, ominous start, preparing the listener for what's to come. The next track, B.I.S (Balmy Illegal Society) is one of my favourites off of the album. It's a classic Aliene piece, with all the trademarks of their style mixed with an almost industrial sound, fitting the futuristic theme of the album. Mast's guitar work reminds me of some sort of machine... chugging along non-stop. The vocals are seamlessly integrated into the music, the screams reminding me of the scraping of metal. Black Jack Age is next on the album. It has a fun bass line opening the song, then the guitar and drums start to kick in. There isn't much to say about this one, but the frantic pace is fun, especially when it's briefly interrupted, before resuming at full force. It's like being in a washing machine. Kourin is another fun track, it's hard to put into words how it works, but it just has an.. immense energy. Up next is Native Devil, another favourite. The track has frantic guitars, industrial bass, and fantastic vocals - although that could be said about most tracks off of the album. It's one of the reasons this album works best listened to as a whole. It's a harrowing experience, but highly reccomended. Then we have Divine the Future from the Stars. Incredible. It's just immense. I love the processing on the vocals. It's frantic and gritty. The spoken parts add an almost chant-like quality. Combined with the repetition, the track is almost religious in quality. There isn't much to say about Seven Deadly Sins that hasn't been said before, so we'll skip to Under the Rose Leaf. This one is a bit different from the others, changing up the pace on the album. The song speaks for itself, but the almost industrial instrumentals are wonderful, returning to the machine-like sounds of the previous songs. The song embodies the rapid changes in technology around the time. On a similar note, the next song, Cyber Patrol Wo Uchiotose, expands on the the sounds and themes of the albums. It's very much an embodiment of 2000s futurism, which ironically serves to date it quite a bit. Chou is the last song on the album, and definitely sticks out musically from the rest. It's more melodic in nature, reminiscent of the main soumds of v-kei in this era, while not losing the signature touches of Aliene, most notably the vocal processing. Overall, it's a solid album, and an interesting look at the progression of the band's music, which you can hear echoes of in members later projects, ex. Insanity Injection.

Divine the future from the stars